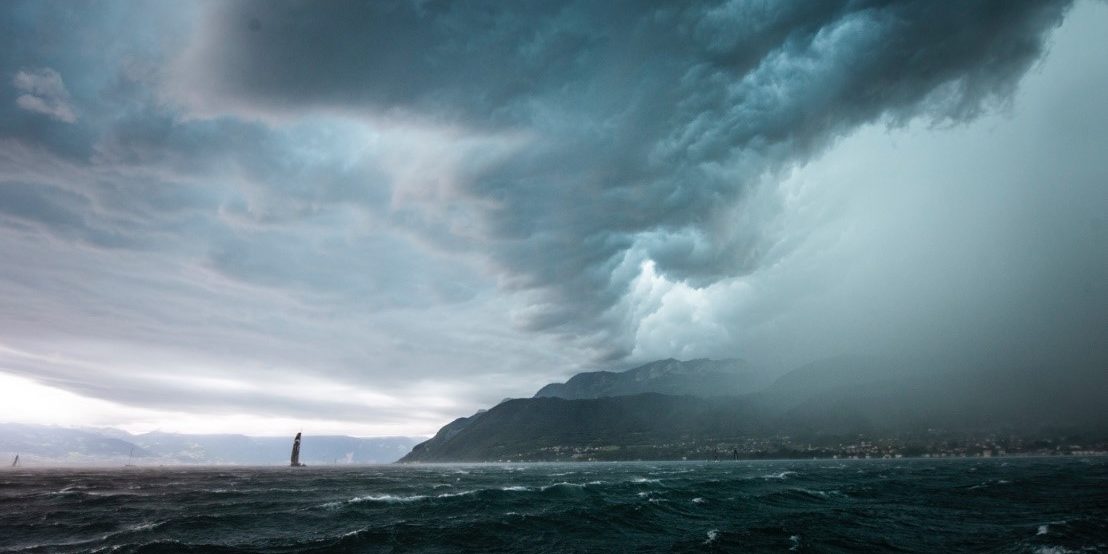 The last edition of the Bol d’Or Mirabaud was epic with winds blowing at over 60 knots and 212 boats forced to give in. Only one Diam 24 od carried on and the skipper states « we were never frightened! » Testimony.

Clément PERRETTE describes himself more as a passionate than a leisure sailor . Since he has joined the shores of Leman, three years ago, he participates in the Bol d’Or Mirabaud. He has chosen the Diam 24 od in order to navigate with his daughters, but also to carry on with contact races – when the conditions are optimal – Leman carbon monsters. For his third participation he has been able to check the reliability of his multihull sportboat in epic conditions.« Windguru had forecasted very strong winds blowing up to 60 knots. We knew it was a possibilility and we had been warned during the debriefing. Many crews prefered dropping out then. We left at around 10h00 am with a classic light wind for the lake but we could see cloud formations increasing on the heights. It was towards late afternoon that the strong wind came in. There was an impressive sky at the back and we unfurled the sails as soon as the gust approched.

The gust arrived fast. The speed at which it moves is impressive, that’s why some were short in time to unfurl. They probably thought they could wait a little more longer.

In one minute the wind blew from 5/10 knots to 35/40 knots and it lasted for one or two hours, with amazing gusts, probably over 60 knots. I didn’t imagine that such a strong wind was possible. There were waves from one to one meter fifty high. We could barely see anything, we were surrounded by a kind of fog and it even hailed. !

Yet, the boat has been constantly manageable, fun to till, surfed the waves thanks to the lift of the topmast. We navigated in broad reaching in order to surf the waves. It’s a real sailing boat. We were never frightened and kept on racing. We had planned to reach the middle of the lake when the gust came in so as to have plenty of water to keep on racing. It was very impressive. There were two incredible gusts of wind. Which lasted some good five minutes each time. In these moments the lake is in turmoil. It’s just crazy.

When the wind calmed down there were many capsized catamarans, flares, it was fireworks ! We had an extraordinary downwind tack. This enabled us to come back at full speed at more than 20 knots. It’s the ideal condition for this boat.

Unfortunately for us, the wind dropped completely when we were only at 10/15 milles from the finishing line. It was a complete wind hole and we took 10 hours to finish the race but we are happy to have gone through it and it was fun.

This year, we are the only ones in Diam 24 od, I really think it’s a good compromise because people on the catamarans had the fright of their lives. We have the specific rigging for the lake, which gives speed to the boat. It might be possible that the Class reveals itself on the lake water plan. “