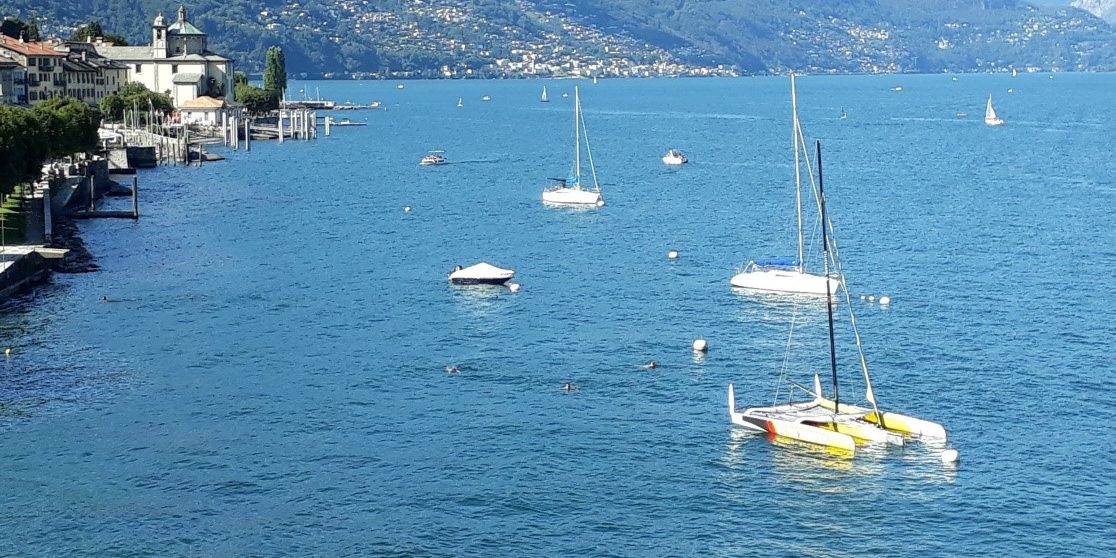 Stefano Beltrando is a keen Diam 24 od sailor in Italy. This summer, he took part in a series of regattas with his wife and children and even bivouacked on the trampoline. “Everyone was surprised to see this family capable of racing at such a level,” he explains. A story of a summer on three hulls.

“ The goal for the summer with our DIam24 was to have a mix of nice regatta not too far from home and fun time. Since summer time is super crowded by Italian seaside, the choice went quickly on lakes and lakes circuits. So first stop was Lago Maggiore for the “Regata del Canalone” in the north end of the lake right by the border between Italy and Swiss. For the very first time I unloaded, stepped the rig and prepared the boat with the only help of my kids while my wife Miriam was taking care of all the rest. The plan was to launch the boat at the south bottom of the lake and have a day of cruise till the north end (66km in total with Islands and magnificent spots along the way). So we got 15kts of wind from north that let us enjoy the best of the boat, literally flying upwind till our booked buoy in the town of Cannobbio. The original plan was to sleep on the trampoline but bad weather forecast for the night pushed us to rent a little apartment just in front of the boat. Next day we had a triangle race to be done 3 times where we choose jib for upwind but large gennaker for the downwind legs. The balance was good and we finished 4th in corrected and real time, behind a foiler and 2 pimped cats. As soon as crossed the finish line we headed back to south just in time for 15th august party at a friend’s house. After a night in the sleeping bag we beat our family record for disassembly the boat and load the trailer : 2h45min!

Next stop were the 2 big race in Lake Garda, “Trofeo Gorla” and “100Miglia” the races were a lot of sailing development happened in last 30 years, it’s were the Libera Class with its 11 guys on trapeze started. For Trofeo Gorla the crew was me, Miriam, Arturo my 15years son and Ariberto a long time sailing friend. The forecast was for a though race and it was true. 25 kts at the start and for the long upwind leg till the north end of the lake with big and short waves.  Very bad start for us, in such strong wind and large fleet (132 boats) I was too afraid for the crew and boat that didn’t battle for a first row start. By the way I only looked for  free space to let the boat run. After 20min we realized we were really fast and were quickly climbing the rank. Aafter 30min we were behind  the foilers, Extreme40, M32 and Liberas. while getting closer to the upwind mark with very strong gusts we were literally flying over the foilers that were seriously struggling to stay afloat….I was blessing the idea to take a reef at the start. Then down wind as crazy from 18 to 22 kts of boat speed but I’ve to say that we’ve been shocked to see the monofoiler (Gonet) passing at least 10kts faster. The big run was stopped at 2NM from the finish line where the wind dropped to almost nothing, we took the reef off and hoisted the big kite. No way, the superlight monohull reappeared from far back and we finished 7th.

Next week second race the 100Miglia. This time the youngest son Enea 12years replaced his mom as bowman. Length of the race is twice the Trofeo Gorla and the story was very similar….bad start (I should learn how to manage it), great upwind, 5th at the top mark, kept 7th for the mid of the downwind and again the wind dropped to zero and nothing came from south. So again the fleet from the back joined us and we battled as crazy with a bunch of sails changes to manage  a 15th final place at 21.30  in complete dark after more than 13hours on the course. Good job done by the 2 young sailors that at time steered and managed the sails changes.

We all enjoyed all this days on our Diam cause we plaid with the leading pack of the fleet  without all the hassle of a large or complex boat. Every one at the sailing club was surprised to see this family able to manage and race the boat to such level. I understood that the secret is the simplicity. To make an example: for a mistake while taking the reef we bend the aluminium boom. Anyway, we finished the race and the next day I called the yard. Got the alloy specs and went in a store 25km from my place to buy a new one for 24 euros! One could say “ why wasn’t it made of carbon?” , Yes it would have been 1 kg lighter but in case of failure I would have spent 10times more and it wouldn’t have arrived in time for the next race. So carbon were it needs like mast and beams but the rest has to be simple and cheap.”

Going fast, that’s good, but crossing the finishing line is better… That’s the lesson learned, at his expenses by Fred BOUJU on the occasion of a regatta organised between Bay Bridge and the famous Golden Bridge. « We flew over the race in 20 knots wind with a run at 23,6 knots and an average speed of 18 knots. We showed fully the capacity of the boat » explains  the  skipper. The only « bone » is that the crew didn’t find the finishing line and the victory flew over their heads. The skipper is all forgiven, so tired and lacking sleep he was back from a trip to Europe.

More than a century seperates the Star, vénérable monohull, from the Diam 24 od, trendy multihull. The Canadien Brian Carmer, renowned skipper of the Star has  yet chosen to try the boat.   At nearly 70 years old, he sailed with pleasure the Diam 24 od. He participates in the most reputed regattas between Canada and Florida.

“ Yes the Diam is very different from my years as a star sailor.  But the similarities are the way the boat is designed and built.  Both very technical and precise. Little adjustments make big performance reactions.  Both can handle a wide range of wind and wave conditions providing a great racing experience for the crew.

And the speed of the Diam is very impressive.  We have installed the Lake rig which makes the boat much more competitive in under 5kts.

I have home bases for our Diam (Carpe Diam) both in Canada and Florida. From these locations I can sail 12 months. We focus on the Sarasota Multihull Regatta in February in Florida.  It attracts many different kinds of multihulls from around the country which all enjoy the winter sunshine.   In our first year with the Diam we finished 3rd. First place was Randy Smith who has won this event many times.   We had a training session with Randy last winter to improve our Diam boat handling and hope to do another this fall.”