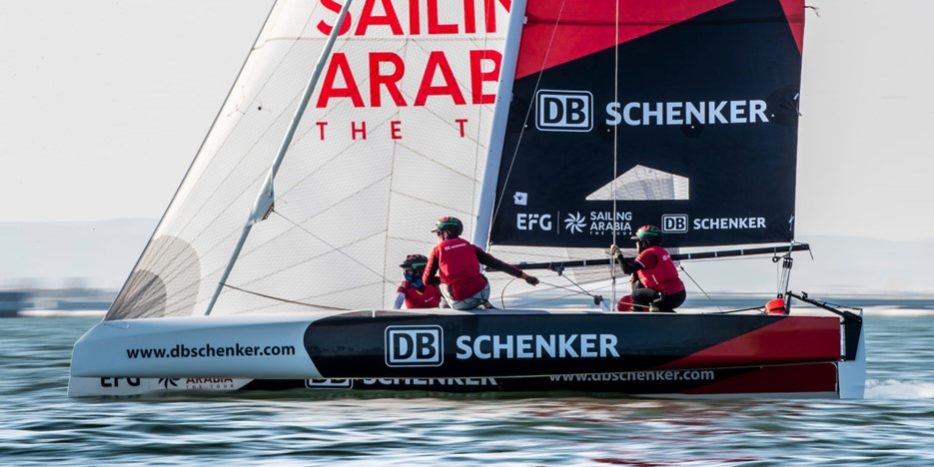 It’s been 7 years already since the Diam 24od made its debut in racing. 7 years of amateurs and professionals falling in love with this small one-design multihull, 7 years refining and establishing the ‘turnkey sailboat’ concept. The Diam24od’s safety, fun and affordability set it apart; users do not need to adapt to it as the Diam 24od accommodates the needs of every user. 7 years challenging traditional categories with a boat designed to delight the young and the not-so-young, from recreational sailors to die-hard competitors. The sportboat has been proving its worth since 2013 and its outlook is more promising than ever! All aboard! 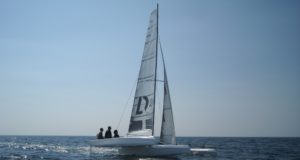 “ In 2013, two prototypes were launched to refine the concept of the first ever strictly one-design multihull sportboat. Our introductory sail took place in October in Lanvéoc, big props to Alain Daoulas for believing in our project.

In 2014, the series competed in its first regatta under the Ecole Navale’s tutelage. The organizers provided us with the perfect environment to launch our boats and the first races were fabulous. The atmosphere onshore was very friendly with all seven crews rounding up at night to share drinks – a radical change in culture and vibe!

“We hosted an open day which turned into a spectacular impromptu show as our commentator presented the crews to the crowd while we launched the boats.”

“Not long after the news came out that our brand new class had been selected to be the Tour de France à la voile boat. All of a sudden we had to pick up….. the pace and meet the expectations that came with our newfound worldwide popularity.

The class grew in popularity through the Tour voile’s brand and soon enough all available boats were in the hands of professional teams. Our shipyard worked wonders to produce, iron out technical details, write up the rules and provide complementary accessories.

The class shaped up and the first general assembly at the 2014 Nautic fair was memorable. Our tiny room was jam-packed with all the superstars in French sailing having a passionate discussion…

However this appeal to the pro scene sidelined the recreational customers we meant to reach as we came up with the concept. Our lead time increased to two years as we had trouble keeping up with orders.”

#Success against the odds for the “Diam 24od” concept

Our boat got a lot of bad rap back then, some nicknamed it…. the “DOB 24” (“lame 24”). It turned out French sailing was very conservative and didn’t welcome the new concept. Many lamented that the good old monohulls were being left behind, not realizing that it was high time for us to bring more speed and excitement into sailing.

In 5 instalments of the Tour Voile since then, we haven’t had a single withdrawal with all competitors fighting for their ranking until the very last race!”

#Racing in France and sailing abroad

“Established sailors soon realized that younger competitors had a better grasp of the Diam 24od than them. Amateur racers were left behind as the competition level quickly rose, edging on Olympic standards. The Diam 24od has become an excellent training support for young sailors making their first steps in high-speed crewed regattas.

While the class’s fate in France was tied…..to the Tour Voile, a growing international customer base was drawn in by the Diam’s 24od native qualities – a boat bringing all generations together through ease of use, high speed made possible for anyone, durability and affordability.”

We’re introducing a new concept to support these changes, a ‘turnkey sailing’ service called Easy Regatta. Easy Regatta allows recreational users to optimize their time and to sail more with full control over their budget – a dream come true for many!

2020 was a time of reckoning as the tour didn’t take place. A little over 100 Diam 24od are sailing globally: 38 in France and over 60 scattered over 19 countries. World Sailing grants Diam 24 one design the international class status. 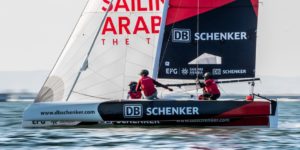 Our multihull sportboat lends itself to many uses. With hydrofoils set to be the future of sailing, the Diam 24 one design is a springboard and a stepping stone into high-speed sailing. Everyone finds their account – from beginners who feel safe, experience the thrill and ….speed and get to know every aspect of sailing, to advanced sailors competing in very high-level regattas in France, to participants in handicap racing and adventure raids.

#Then 2021, as you know, was a lopsided season that saw us organize a last-minute yet beautiful edition of the Tour Voile on the water, participate in a tour of Italy, and initiate creation of the RUS class.

All in all, there’s still a lot to do for the Diam 24 one design class whose many qualities pave the way for a bright future. Not only is it simple, accessible to everyone and forgiving; it can also sail in any weather, feels safe and is very seaworthy and affordable.

The Diam 24od’s motto may be “go fast and keep it simple”, our project’s is “do the right thing and you’ll go far”.

2022 preparations are already underway and our shipyard is brimming with new options: Diam 24 one design 2022 model…., fully-serviced, as good as new second-hand D24od, Easy Regatta, weekend-long race among friends on sea and land… unless you fancy joining a team of young champions in the making on the Tour Voile. We’re looking forward to hearing from you!