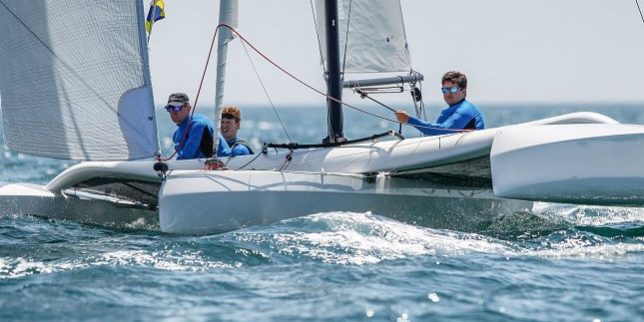 For the first time 7 Diam 24od have participated in the mythical Tour de l’ile de Wight, and they were not there merely to fill the blanks. In the Solent light breeze, Benoit Champanhac and his team came up 11th against more than 1200 competing boats !.

The Diam 24od is ranked second multihulls after the MOD 70 winner of this Tour 2018. Benoit and his team passed the finish line after 1 hour and 15 minutes  in a race run for almost 10 hours.

Benoit was nostalgic about his Lacustre sails (the big Gennaker and Code0) tested during the Bol d’Or 2018. He explains « another light breeze regatta, had we been equiped with our light breeze wardrobe like all the other boats, the Code0 and the big Gennaker, I believe we would have made a better general ranking.… But for sure, as we came to run against our English friends in the Diam series, we did it the fairplay way… »

ENGLISH BOATS INTO THE GAME…

About 28 minutes later, the second Diam24 one design crossed the line at the 29th place general ranking, it’s Phill COTTON, the new President of the D24od UK.

The Diam 24od podium is completed by Hannah Stodal, a newcomer in this series preparing a Vendée Globe race.

« It’s a performance well above our expectations. We know the performing capacity of the boat in all types of wind and sea conditions, but still, I am always slightly tensed when we sail in light breeze, as with all sorts of light boats. With our 3 sails it was hard to keep pace with boats unfurling their big Code0 sails and Gennakers perfectly adapted to light breeze sailing conditions »states Vianney ANCELLIN, director of ADH INOTEC shipyard.

Next meeting in England for the  Cowes week from 4th to 7th August.