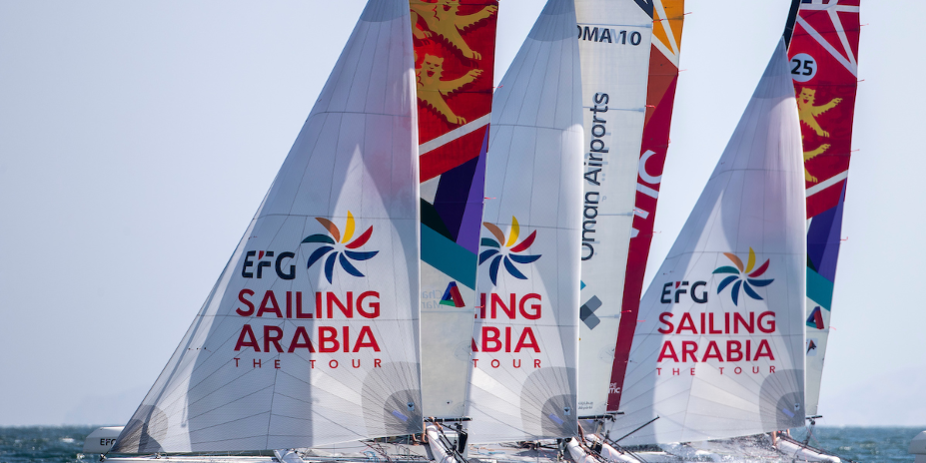 The 2020 season has begun since January with the 10th edition of the EFG- Sailing Arabia The Tour.

This very first Diam 24 event has ended with the merciless victory of the EFG team leader Sofian Bouvet, together with his french crew Germain Gaulthier and the Oman crew Ali Al Balushi.

This impressive trio imposed itself as from the first race, their opponants didn’t stand a chance. They will definitely be hard to beat for the Tour Voile…

The SATT, has also been a great discovery track  (5 stops on 1500 km) along the Oman coasts, associated to touring visits offered to the teams and their crews.

The season would have continued with the Grand Prix de la Grande Motte, the first 2020 event of the Tour voile series *. While the Spi Ouest France, which should have opened the Diam regattas season has been postponed to September 2020.

Off season, week-ends trainings are organised betweenLa Trinité-sur-mer and Port la Forêt. And, with the Easy Regatta activity, it’s also possible to organise a sport event wheverever you want to.

As specified in the introduction, a new version of this 2020 calendar will be made available as soon as possible.

Nevertheless, as every year, the Diam 24 circuit will offer events both varied and complementary everywhere in France and abroad, coupled with training sessions.