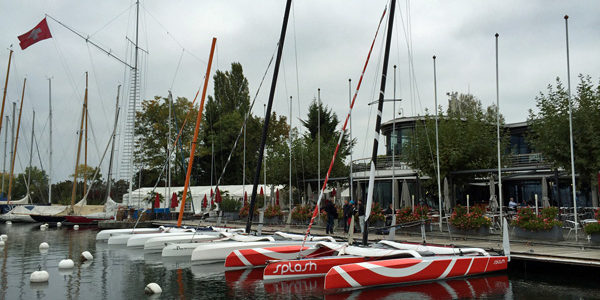 Switzerland has also succumbed to the charms of the Diam 24od …. Last weekend, two boats were delivered to Geneva giving a great opportunity to organize test sail on this one design trimaran over a two day period. Future owners , professional sailors and general public assisted with interest. A new Diam 24od class has thus been born in Switzerland and in june 2016, this new class will be on the start line of the Genève Rolle Genève and of the Bol d’Or.

The Société Nautique de Genève warmly welcomed the ADH Inotec team last weekend. The delivery of two Diam 24 od gave the opportunity of creating an event on the Leman Lake
The Swiss Diam 24od Class has been created. A racing calendar is being formed on the Léman, and Neuchâtel lakes as well as the Garda Lake in Italy, completing the Mediterranean program.
A global presentation of the Diam 24od and its racing circuit was made during an evening get together, including the one design concept, the development of the racing circuit with the objective of limiting travel to 300kms for crews, the setting up of local aftersales service companies * so that sailing remains a pleasure ….. On Saturday and Sunday, all those who wished were able to test out the Diam 24od in ideal conditions : 5 – 15 knots of wind.

The desire for easy and fun sailing
Obviously,The two new owners were the first to discover their own trimarans . Clarence Peter, ex owner of M2 – an all carbon catamaran, chose the Diam 24od for the pleasure of sailing on a less physically demanding but just as lively and fast multihull. The second buyer, Alexandre Soucas is a Grand Surprise sailor. He wanted to reboost his crew with the challenge of multihull sailing.
Despite the very different profiles of these two sailors, they were both immediately comforted by their choice of ADH Inotec’s one design trimaran. « A sound and seaworthy boat » , « easy to handle », « fast and fun » …

Professionals and racers are of the same opinion
Members of ADH Inotec also had the pleasure of welcoming professional sailors Elodie-Jane Mettraux and Annie Lush (crew on board SCA on the last edition of the Volvo Ocean Race), who came to discover the Diam 24 od, and the Diam 24od owner and skipper-rider Aurelien Ducroz from neighboring Chamonix, who was 9th on the last Tour de France à la Voile. All were delighted with this multihull test sail. Fuel for new projects … ?
Members of the Société Nautique de Genève were also able to profit from the events of this Diam 24od weekend and discover its assets, notably the facility of building up, dismantling, and transporting of the boats – essential qualities when one sails on a lake.

Calculating …
In brief, it can be said that the Diam 24od made a good impression in Geneva. Two boats on site and ready to welcome other partners to train with, the Swiss Class has been created and the first Swiss race for this one design trimaran has been programmed for june 2016. Knowing that the delivery span for boats has been bought down to 6 months, in time to enter the Genève Roll Genève and the Bol d’Or …. Don’t delay in reserving your Diam 24od !

* On the Leman Lake, it’s the Jean Psarofagis boatyard that has been designated by ADH Inotec for all services linked with the Diam 24od.