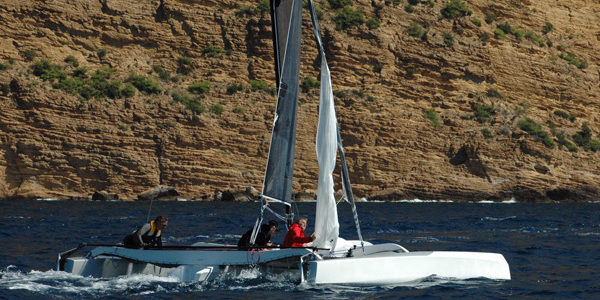 The Adh Inotec team is about to launch a big tour in the Mediterranean ! Four to six Diam 24od crews will participate for the first time this year in Novembre à Hyères. To follow up, test sessions have been programmed in Monaco, Cannes and La Grande Motte. In 2016, the Diam 24od’s can already promise us a rendez-vous for the Primo Cup. Take note !

From the 6th to 8th november, the Diam 24od will participate for the first time in Hyères. 4 to 6 teams (amongst them maybe Aurelien Ducroz and Emmanuel Versace’s teams) will meet up to race side by side with crews participating in the French One design cruiser championship.

Tests in Monaco, Cannes, La Grands Motte
The ADH Inotec team will then offer several Diam 24od test sessions : in Monaco from 14th to 15th november, in Cannes during the week of 16th november and in La Grand Motte the 21st and 22nd november.
“These three weeks in the Mediterranean have for objective to meet up with racers, to propose trial tests of the boat of course, but also so sail side by side with other series, particularly monohulls, as for those who are interested, the Diam 24od is the ideal support for the passage from mono to multihull sailing” explains Vianney Ancellin.

A mediterranean racing calendar is also in elaboration including no less than five big events such as the Primo Cup in february, the Massilia Cup in april, Novembre à Hyères …

For all these events, a special Diam 24od ranking will be established – as long as a minimum of 5 Diams 24od compete.