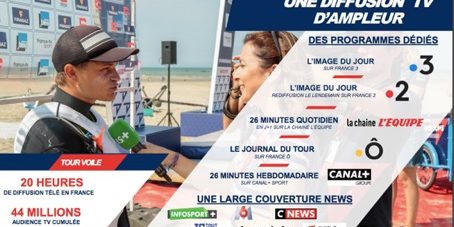 ASO, the Tour Voile organiser will make available for all the teams the key figures for the 2018 edition. Thanks to the Diam 24 od which allows sailing close to the public, the events gather 10000 visitors each day. On the media side, the advertising income cumulates nearly to 4 millions euros.

ASO moreover publishers the outcome for various teams. Beijaflore, second in the event, cumulates nearly 2 millions euros publicity spinnofs. The young teams are not badly positioned like Team Dunkerque Voile. Victorious of the amateur ranking, the team comes up to 2 millions euros spinoffs.

The document is enriched with data surveys, an important source to prepare the next  edition. In order to help the team in their quest for parnerships, the organisers will make available a template of a presentation documentto be personalised.

The 2019 season will be even richer in outcome with the media coverage of the latter part of the season. The « Tour Voile Series » circuits, 5 events running from March to June.

It gathers all the Tour Voile preparatory events in order to enable the teams to communicate as early as the start of the season, with serious means (follow-up, edition, Images) set up on each Grand Prix : One communication season running on 5 months !

The key figures of the Tour Voile :

In the framework of the internalisation of the Tour Voile and of the Diam 24od circuit development in France and abroad, ASO announces the implementation of a sponsorship operation. Each team sponsoring a new foreign team will beneficiate from a 30% discount on the registration fees.

The sponsor must have already participated in the Tour Voile and the sponsored team must be a 100% foreign crew and registering for its first Diam 24 od participation.