Skip to content
Top-bar (EN)
You are here:
GeneralInterviews 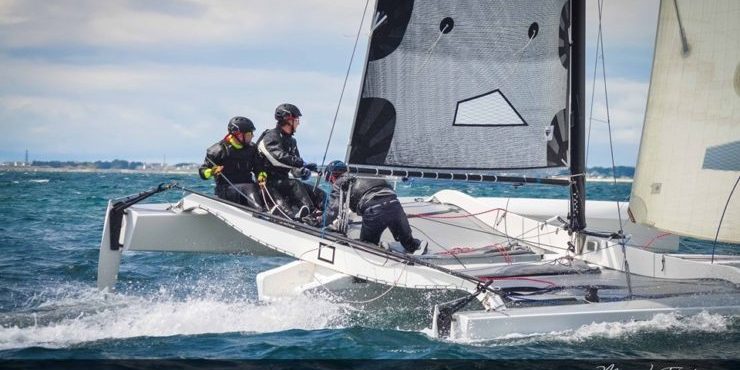 After fifteen years of regattas in J80, Xavier DUBOS and his crew ( Maël TANNOU and Benoit TOULET) have decided to try out new series. Attracted by the Diam 24 od and the system « Easy Regatta », they have just broken new ground by participating in the Eurocat.

What criteria were you looking for in choosing the Diam 24 od ?

To put it simply, we are three good friends who share a fifteen year history of French and World championships in the J80 and we had arrived at the end of a chapter. We loved that class but we wanted to try something different, more exciting, simpler logistically but also something more NOW, a bit more fun. Mind you, the criteria we had to satify were very rigourous. If we were going to try a new series of boat there were three things that were non-negociable.

It had to be a well-built boat, solid and accessible. We aren’t here to to DIY repairs, we want to sail. The goal isn’t to spend ages on preparation but to sail on equal terms. Accessibility was our next criteria. When we saw the Diam we wondered if we’d be able to master it but after the first training sessions and taking part in the Eurocat we were able to do 30 knots and we soon realised it was totally manageable. After, of course, it’s going to have to perform but its a very accessible boat.

The second criteria was that it had to be a monotype. We come from a monotype culture andlike to race on equal terms. The fact that it has a World Sailing certificate shows that we werereally in our frame of reference with this boat.

The third criteria was non-negociable, there had to be a fleet which existed already and at a high level. With the Diam 24, it is really an excellent level, really great for professionals and we have also  found an excellent fleet of amateurs being formed which is really interesting.

How did you prepare for the Eurocat ?

We took part in the training sessions which were really well put together, with good progression. At Saint Philibert or at Port La Foret, we were with real coaches. They are real training sessions worthy of the name. Whether with Daniel Souben or with Sofian Bouvet you  learn. I did thousands of training session with the J80 and only about a quarter were useful.

We did lots of manœuvres but they weren’t real training sessions.At the level of  enthusiastic amateurs you saw that they were there to have fun. We are here to learn and progress. We don’t know where it will lead us but it’s really refreshing !

Were there any concerns about moving from single to multi-hull ?

One of the questions we asked ourselves was to know if, at 30 knots, we could still race. We know that with the J80 the boat will lean but it’s not dangerous. With the Diam 24od we didn’t know. During the Eurocat we did more than 30 knots and never felt like we were in survival mode. It reached 32 knots in the passage of Houat and it handled like a dream. The boat is  totally safe and we were never frightened once. The apprehensions we had were all lifted.

30 knots in a Diam, it handleswell. It’s not going to cause any problems.

Why did you chose Easy Regatta ?

Easy Regatta is exactly the format we wanted. It’s the icing on the cake. It’s a blend of rental,

preparation and logistics. We have our family lives and busy jobs. At the week-end we want to sail, not solve difficult logistical problems. We arrive a bit like stars to explore the circuit as and how, we wish. It’s really great. Today, we are all over the moon about that.

We are bit like beta testers for the Easy Regatta formula and we send our feedback to the boatyard. During the Eurocat we had some small problems with a winch on the first day.

We had a de-brief that evening with Hugo and it was all sorted the next day. In terms of comfort its real luxury. Its absolutely fantastic when you want to discover a new boat. I’d recommend Easy Regatta 1000 times. Test the boat, on your marks,get set and go ! When I speak to people about it their eyes light up ! It’s not just renting, it’s a blend of renting, preparation and logistics. At the end of June, for the Raid Emeraude, we’ll have a boat ready-prepared already in Saint Malo. We don’t need to dismantle the boat or prepare it. It’s just a dream.