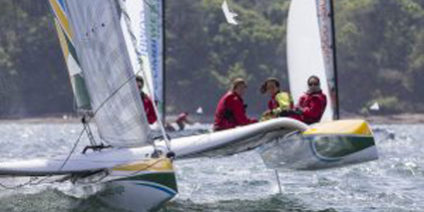 The America’s Cup started the fashion followed by the Volvo Ocean Race and soon sports clubs and sailing schools were decidedly turning more and more toward the fastest and most fun boats of the market : sailing is passing into the era of multihulls and the Diam 24 is at the heart of this evolution.

The Diam 24 od has been designed to be accessible to all and to allow monohull racers to experiment the pleasure of high speed racing. The concept of this strict one design, easily dismantable trimaran, is to make sailing easier and with fewer constraints.

The racing circuit has been set up around existing social events over four distinct sailing territories in France and soon in Europe, including meetings on long distance coastal races. A rental service is being organized at certain events or for weekend leisure sailing.

The DBox, a special Diam 24 storage box designed to organize and share boat transportation has been developed to facilitate travel.

Multihulls : an epistemological rupture
The fleet of Diam 24od owners, (not including Tour de France à la Voile) is expanding in France and abroad and this is not about to stop according to Henri Bacchini’s analysis. (Vice president of the French Sailing Federation)

Henry Bacchini : « We are experiencing an epistemological* rupture in the sailing world : we are passing from one world to another. At present, the young generation want to fly ! For years, we’ve been sailing with deep and heavy keels, then we built lighter and wider boats ….. it was a major evolution.

Today, with multihulls, we are witnessing a new rupture and the Diam 24od is part of this environment : from a sports point of view , notably via the Tour de France à La Voile and from the leisure sailing point of view making the pleasure of trimaran sailing accessible to all. The boat is solid, versatile and a good performer. The one design aspect along with the whole Diam 24od concept are also ruptures : for example, if we beak parts today, we replace them and continue racing, as in Formula 1 ! It’s a totally new era …. »

Establishment
The growth of the French, Swiss and British Diam 24od fleets is a reality. Since the launching of the first Diam 24od, the orders continue to roll in from public in Europe as well as Australia and the USA….

With ASO’s commitment to maintain the Diam 24od as the official boat for Tour de France à la Voile untill 2019, this one design trimaran holds and will continue to hold a strong sporting attractivity for years to come, giving time for investors to profit from their partnerships and time for the Diam 24od racing circuit to be established .

Having had a good start, ADH’s small trimaran is in the process of establishing a promising future.

* The epistemological rupture corresponds to the passage toward new knowledge via the rejection of former knowledge that must virtually be denied in order to reveal the novelty.