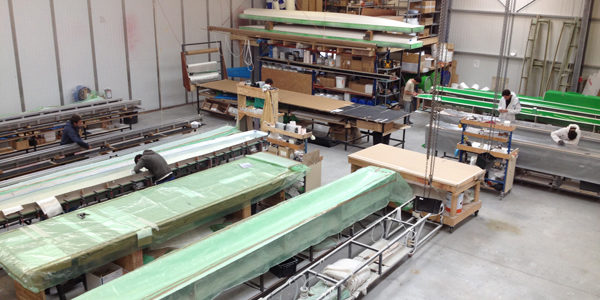 Today, the Diam 24 OD is making its reputation in the sailing world. What we ignore, is the origine of this boat and how a boatyard employing 13 people, is in the process of perfecting and producing 30 strictly monotype trimarans within only eighteen months : a technical and human feat.

Since january 2015, the ADH Inotec team have doubled their efforts to produce the Diam 24 OD’s ordered for the Tour de France a la Voile event.

In september 2014, it took five people to manufacture one boat per month. A month later, the production doubled. Since january 2015, the ADH Inotec team employ eight extra people and manage to produce one boat every ten days ….
And all is manufactured on site.

Everyone has their own speciality and all are polyvalent.
In order to optimize the human and material resources of his boatyard, Vianney Ancellin, designer of Diam 24 OD and director of ADH Inotec has organized the production of his one design trimaran into 6 poles : central hulls, outer hulls, connecting beams, masts, hardware fittings, finishing touches. One manager per pole is shouldered by one or two technicians. It is a true assembly line that has been set up, man made and perfectly mastered.

Within this assembly line, everyone has their speciality and all are polyvalent.

Vianney Ancellin : « Between september 2014 and january 2015, we have trained eight technicians and organized the yard into poles. We are limited by space to increase the pace, and pushing further would increase risks. We will be able to fulfill our objective and deliver 30 boats by the end of may for the Tour de France à la Voile, that is our goal today. The 30 Diam 24od produced are all consistent and identical »

Simple, accessible and low cost
Facing ever growing demands, why not delegate at least part of the production ?

To respect the budgetary framework of the Diam 24 OD specifications, and also to master the one design aspect with perfection.

Vianney Ancellin : «  The risk with sub-contraction, is no longer being master of the cost price » So after consultation with Bertrand Desjoyeaux, technical adviser and partner of ADH Inotec, the team had decided back in 2014 to manufacture all on site, on the base of a simple boat, accessible to all and low cost (in the sense of nothing superfluous, equipped with only the essential) to be able to respect the threshold level of profit for the yard.

Vianney Ancellin : «  This basic criteria « simple, accessible and low cost » are the backbone of the project. …. But developments are possible, as, for example, in a few years time, the installation of an electric in board engine, or foils. »

For now, ADH Inotec continues its race against time in preparation of the big challenge that was launched last year with ASO.