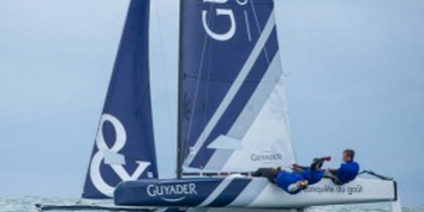 – Nine races in two days and heavy competion on the sea between the 6 crews participating.
– The podium : Guyader, Cheminées Poujoulat and Faraman

This Grand Prix organized by the Yacht Club of La Grande Motte, was the very first time the Diam 24 od class raced under the pyramids. Depite the weather conditions on Saturday, the six crews in competition for this event, which itself is a preparation for Tour de France à La Voile, were able to dispute nine races (6 technical courses and 3 coastal courses) in varying weather conditions : light airs and up to 15 knots of wind.

Exhausted but happy
A great weekend, battled in a sporting but friendly manner, with finishing lines planted in the middle of the port, opposite the harbour master’s office. A bit weary after a very full day of sailing on Sunday, the teams were all smiles when they touched down on land. Especially Vianney Bergot, Lucas Chatonnier and Emeric Michel who won hands high due to their relentless regularity. Already winners in Monaco on Diam 24 od, and also third on the French leg of the Red Bull Foiling Generation. 19 year old Vianney Bergot is one of the new faces to follow.

Following behind Guyader, a diverse and talented tea

m take second place, that of Cheminées Poujoulat, composed of the multi circumnavigator Bernard Stamm and two young local racers who are training for the 2020 Olympic Games, Hugues Puimatto and Marie Soler. Third on the podium the 100% Yacht Club de La Grande Motte team : Faraman with Nico Béranger as helmsman, the Président, Jean-Marc Goldstein and the Director, Gwenaël Gbick as crew !