Skip to content
Top-bar (EN)
You are here:
Events 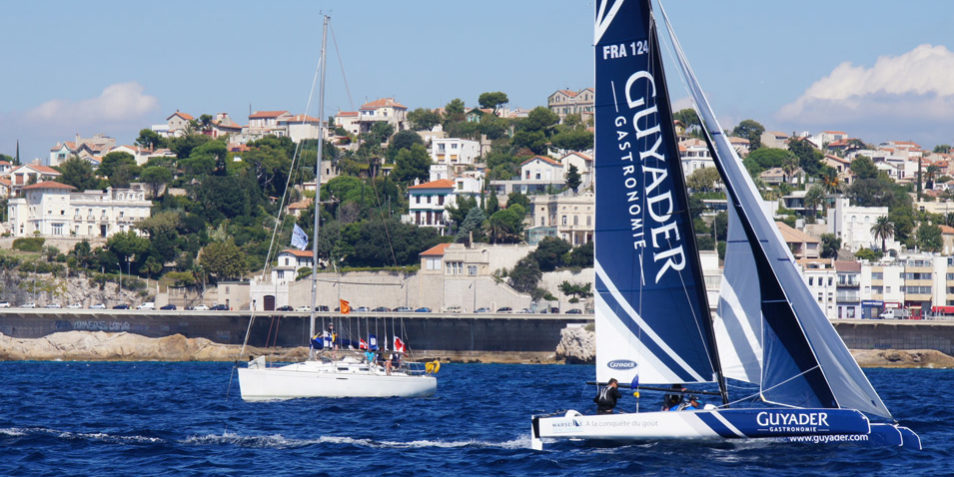 This weekend the Diam 24 One design’s were in the Mediterranean for the « Marseille One Deign » races organised by Sirius Evènement.

« The conditions were as idyllic as ever for this first ever match racing encounter of 8 Diam 24 crews in the Mediterranean. This form of racing, that became famous through the America’s Cup, could be compared to a highly charged game of chess where each of the two boats in competition must excel physically and tactically. Raced in a very short times lapses, 15 minutes at the most, 28 races are programmed over three days so that all the teams can meet up. While we are writing, the duals on Diam 24 were not yet finished : 6 to 8 races have been sailed and while the sun is dipping opposite of the Frioul Islands, we can imagine the same enthiusiasm from the future potential competitors of Tour de France à la Voile »

« Alexia Barrier, skipper of 4myplanet on Diam 24, is testing this trimaran that will be replacing the M34 in the Tour de France à la Voile. : « It’s a boat with a very promising future, the sensations are there, we are delighted ! Anyway, future sailing is on multihulls and flying boats, so here we are » Even if the event is not an official challenge, as it serves as a training session for crews wanting to try out boats loaned by the ADH Inotec boatyard, Alexia shows us her ambition : « My objective for this weekend is to win ! » Being the sole girl in the event, she does not want to simply compete : « I find it sad that there are not more girls, because sailing is not only pure physical effort ! I can’t explain why there are so few of us, but girls certainly have their place on board, at the helm for example …. Gentlemen – let us helm ! »

Christopher Pratt, who is preparing for the next Vendee Globe, also came to test the Diam 24 on water grounds that he knows well « The Tour de France à la Voile has been my school since I was a kid. Along with my partner, Dimitri Deruelle (in charge of the Marseille One Design sports organisation) we are aiming to finance a boat with the Ville de Marseille, so to be able to try out the boat on this beautiful stretch of water along with other match racing experts – was inevitable for me. »

Ten races were sailed today on Diam 24 and the crews Christophe Alzieu (Yacht Club de Toulon) and Arthur Herreman (MTW) who, by winning each of their duels, finish first in a tie position on the all over provisional ranking.

On Diam 24, the new trimarans to replace the M34 for the Tour de France à la Voile, 8 crews competed in a match racing event. 28 races were sailed so that all crews could meet up. All came mainly to test out this new boat from the breton boatyard ADH Inotec, that was to sail in the Mediterranean for the very first time. It was without surprise that the crew from Le Havre, Arthur Herreman, double champion « France epoir » of match racing, finished in first place with 100% victory from the 7 races sailed. « The Diam 24 is a super boat with a great feel. It will make the Tour de France à la Voile all the more exciting . » This young competitor, who already has several years of racing to his credit, was impressed to share the water grounds with U.F.O’s such as GC32 : « Now sailing is this : foils, multihulls, high speed…. I look forward to see what will happen in the next ten years ! »