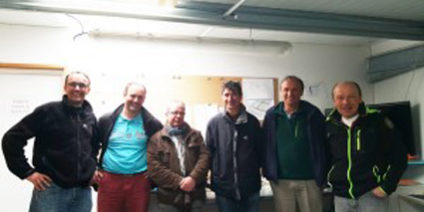 Its a story about racers of forty or more. They are all members of the same sailing club, the CVCEP of Saclay near Paris. A band of 5 to 7 friends who have been sailing together for years on Finn, on Laser, on cruisers, on sports cats and also on Open 5,7 for the last 3 years.

For the 2015 edition of the Spi Ouest France, « we witnessed the arrival of the Diam24 od’s …… and we had the leisure of inspecting them close up as we were on the same race course, specially when they sped by at 25 knots under spinnaker and we were 10 knots slower than them ….. it makes you ponder ! We were at maximum capacity on the Open 5,7. It’s also a series where the average age is quite young. Finally, the reorganization of Tour de France à La Voile thanks to the Diam24 ods really impressed us. In brief : this trimaran has truly captured our attention ! »

After our first contact with the ADH Inotec team at the 2015 Nautic, the group from Saclay who were particularly seduced by the « leisure for all public » specifications  of this sportsboat and the development of the amateur racing calandar, « it was exactly what we were looking for »  made arrangements for a trial session of the Diam24 od in Port la Forêt.

Last week, they had the leisure of sailing, manoeuvering, acceleratiing, scrutinizing, building up and dismantling of this one design trimaran over two days. « This confirmed the idea that we had been acquiring of this boat : entertaining, secure, a fine touch at the helm and well built …. »

A reflection is now in progress as for the financial aspect of the project : co-ownership, partial sponsoring, financial aids and/or club financement …
The objective for them is to continue racing on Finn and Laser « because we love it » and to federate two crews (6 people) who could relay each other on the Diam24 od racing calendar with the aim of participating in the 2017th or 2018th edition of Tour de France à La Voile.

See you soon on the water !